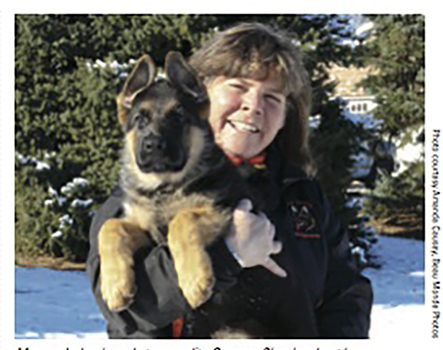 Megan Judge is the owner/proprietor of Haus Juris German Shepherds.  She has a bachelor’s degree in sociology and criminal justice from James Madison University and has served in the United States Army. Megan has been training dogs for twenty-five years and has varied experience with animal care as a veterinary technician, scrub nurse, breeder and behaviorist.  Known internationally for the quality dogs she breeds, Megan has trained many dogs to achieve accolades to include SCHUTZHUND titles, AD, BH, and breed surveys.
Megan has also been a handler in the prestigious Sieger shows to include courage tests, show training and all facets of competition.  She is the leader of Team Haus Juris.
Prior to establishing Haus Juris German Shepherds, she was the owner of Pet Guardians in Mclean, Virginia, a business which included pet sitting, grooming and training.
She was the training director of the German Shepherd Club of Fairfax. As owner/proprietor of Haus Juris German Shepherds, she has owned and trained the number one ranked German Shepherd in North America.  Liedo vom Kuckucksland was the youngest Sieger (number one dog) in the history of the WDA.  Liedo’s progeny and the progeny of all the Haus Juris stud dogs have contributed to society by serving as patrol dogs, protection work and therapy work because of their outstanding temperament.  Many of Megan’s clients have received their Canine Good Citizen title because of her training.

Megan Judge has received a number of honors and awards including the prestigious Breeders’ Award.  Megan’s dogs are known internationally for their temperament and abilities in the show ring, work ethic and most of all for their companionship. 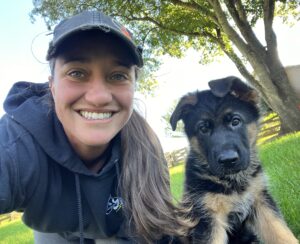 Chrystal Pappas has been training dogs for a little over eight years now.  She has been very involved in assisting veterans train service dogs for PTSD.  She is an AKC Canine Good Citizen evaluator and has been surrounded by dogs all her life.  As a young girl she dreamed of becoming a vet and spent countless hours as a teenager volunteering for her local veterinary office.  On her off time she helped bathe and groom dogs at a friends grooming salon.  During this time she worked very closely with her family dog Amy, who was a Shepard Retriever mix and lived to be 16 years old!

Chrystal was an avid soccer player and trained Amy to play with her, she says her skills were thanks to Amy, and the countless hours training together resulted in her playing for the Greek Olympic Soccer Team in preparation for the 2004 Olympic games.  Unfortunately, due to a knee injury she wasn’t able to play during those games.  After recovery she joined the Marine Corps to play for them and made the Armed Forces Team without a tryout.   During her time in the Corps she was known in Okinawa as the dog lady, tending to strays and helping families with their dogs.

In 2006 she moved back to California where she got her first dog on her own, Dakota, a beautiful Belgian Malinois who was a Marine Corps Military Police K-9 drop-out.  Dakota and her were inseparable and did everything together.  Two years later Roxy, a blue Doberman joined her pack.   Chrystal continued to work closely with family friends helping their dogs until she was blessed with her two kiddos Sonya and John.  Shortly after the birth of her kids she got accepted to University of California to become a Marine Corps Officer.  Unfortunately, her dream of becoming an officer fell short as her knee gave out again and she was medically separated.

Having to decide what she wanted to be again when she grew up she fell back on her love of dogs and earned her Bachelor’s of Science in Business.  Times got hard just before graduation as her and her husband split up and she was forced to find other means to take care of the family.  She opened her own business training and pet sitting dogs out of her home which just grew her passion for dogs overall.  The dogs were her therapy and played a crucial part in her and the kid’s recovery of a horrible divorce.  Simultaneously to bring in extra money she worked at another local training facility bathing and training dogs.  This is where she got a lot of her knowledge working with Service Dogs as she was prescribed her own through the Veterans Hospital to deal with PTSD from deployments and everything that was going on.  The combination of the two made her very versatile in understanding multiple breeds and how to work with them.

Eventually, Chrystal moved back to Virginia where her family was and reopened her business there. While she enjoyed this tremendously she still longed to learn more and found Haus Juris in a local job listing.  After doing some research Chrystal fell in love with Haus Juris and called to inquire about the job.  After her first day she knew this was where she wanted to be and the rest is history. 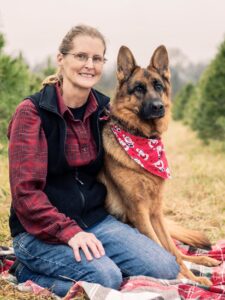 Kristen grew up in upstate NY. Her love for German shepherds began when she was 8 years old, and her dad brought home a 4-month-old German shepherd puppy named Shannon. Shannon lived to be 15 years old and was a big part of Kristen’s growing up years. 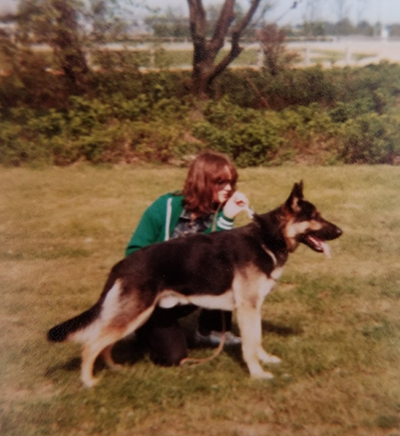 Anita has 40 years of experience training dogs of all ages. She has been a part of the Haus Juris training staff in the Advanced and CGC classes. She is an AKC certified CGC Evaluator.

Anita Wray grew up in Belgium. She was surrounded by dogs from birth. After a Malinois and a Bouvier, the family decided to get a purebred German Shepherd, Timmy. Anita helped train Timmy for confirmation shows when she was 12 years old. She loved working with Timmy. She would visit the local ringsport club to see what that was all about. She really liked German Shepherds though, and most dogs at the ringsport club were Malinois. So she saved up and at age 15, she got her very own GSD, Zigeuner vom Kai-Ro, a German import. The breeder told her about the nearest VVDH Schutzhund club. She checked it out and was immediately hooked. She became a member and rode her bicycle to dog training 10 miles from her home, twice a week. The breeder of her second GSD, Dingo vom Bohawald, was so impressed by her training ability that he gave her one of his females to train for Sch I while Dingo was still too young to run to practice.

Anita also worked summers at a friend’s boarding kennel for years. She enjoyed spending time with all the various breeds, although her preference was with the large dogs. She was in charge of rotating the dogs to the large outdoor runs. The owner ran a grooming business out of his boarding facility. Anita helped out with baths and brushing. She loved working with dogs, there was no doubt in her mind that she would be a veterinarian one day. But that dream was shattered when her math and physics academic achievements weren’t up to par. She kept working with dogs though. Her friends, colleagues and neighbors knew which person to ask if they need help with their dog.

Anita worked for the U.S. Army in Belgium at a local military storage site. The site was closed after she was there for 11 years because of the Reduction in Forces stationed abroad. While in between jobs, she turned to her passion once again and worked part-time at a vet clinic in Belgium. She was in charge of before and after surgery care, IT problems and pharmacy/supplies inventory. She never kept it a secret that she really had wanted to become a vet. She was thrilled when the vet/owner rewarded her good work with the opportunity to assist in surgeries on Wednesdays.

Meanwhile, family life was taking over and raising her two boys had become the number one priority. After a family tragedy, Anita and her family moved to the States. She had a Rottie named Lando at the time, and her and her ex bred Maine Coons. Lando unfortunately succumb to lymphoma at the young age of 5. The next family dog was a rescue Greyhound/Collie mix. He was named D’Argo, after a Farscape character. D’Argo was a great family dog, the best companion for the boys. Anita trained D’Argo in obedience and some basic tricks. When D’Argo passed away, the entire family was devastated. A few weeks later, Anita acquired her current dog, a Rottie named Thor. She started actively looking for a club to train her dog. She came across a club that uses the field at Haus Juris, and the rest is history. Thor was afraid of his own shadow when Anita got him at 6 month old. She managed to get a CGC and BH with him. 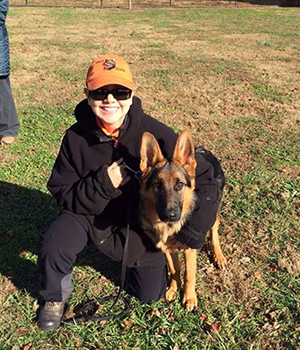 Sandra Sylvester has owned German shepherds her entire life.  She and her husband Lyman are currently the proud owners of Abby, a certified therapy dog, and Kairo who will also become a therapy dog when he turns one year old.  Sandra has a B.A. from Providence College and a Juris Doctor from New England School of Law.  Sandra served in the United States Coast Guard.  She is an honors graduate from Animal Behavior College and has completed the Volhard Top Dog Training Instructors’ Course.  She is a Canine Good Citizen Evaluator and the Northern Virginia Chapter Coordinator of Paws for Friendship, Inc.  Sandra has published a number of articles on police canines and animal cruelty.  She has trained for the Humane Society of Fairfax County and for Haus Juris German Shepherds. Sandra teaches puppy classes, basic one and two and advanced classes including therapy dog preparation and agility.

Lyman Hunter currently owns and trains two German shepherds.  He has his B.S. R. Ph. from Massachusetts College of Pharmacy.  He received his Doctor of Pharmacy degree from Virginia Commonwealth University and a Master’s of Science degree in Biodefense from George Mason University.  Lyman graduated from the Volhard Dog Camp and the Volhard Top Dog Training Instructor’s Course and will graduate from Penn Foster in March, 2013.  Lyman’s background in medicine has served his dog Abby who is a special dog with special needs.  His quiet and calm demeanor have helped a number of dogs who are fearful of men during his time at the Humane Society of Fairfax County.